Fleurieu Living Magazine is a glossy lifestyle publication that showcases the best of the Fleurieu Peninsula, including Kangaroo Island. It aims to seek out the most interesting people and places, and to highlight top-quality produce. It aims to inform through intelligent writing, and to inspire through beautiful photography. And our autumn issue is on sale now.

SO WHERE CAN I BUY IT?
Fleurieu Living Magazine is widely available throughout metropolitan Adelaide and the Fleurieu region in newsagents, wineries, restaurants, cafes and B&Bs. It is also available in Qantas Club Lounges across Australia! List of stockists.

You can also subscribe by filling out the subscription card inside the magazine, or by using our online subscription service. You can now also purchase a digital subscriptions if you’d rather read each issue on your smartphone or tablet.

A UNIQUE OPPORTUNITY
As the only local publication of its kind, Fleurieu Living Magazine presents a unique opportunity to market your brand to a diverse and discerning adult audience. Its distinctive mix of content provides broad appeal, making it an outstanding marketing tool for attracting both new and repeat business.
ADVERTISE WITH FLM
Our latest media kit outlines advertisement sizes, advertising rates, material deadlines and accepted artwork formats. Download the advertising info. 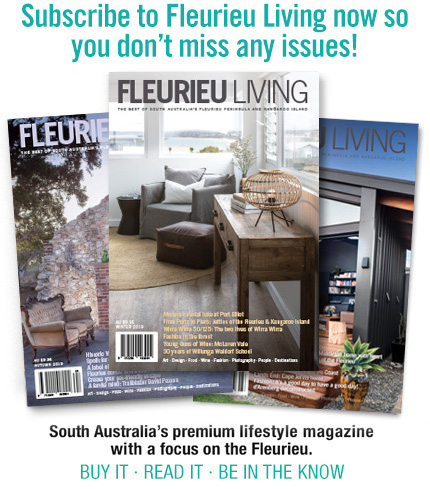 SUBSCRIPTIONS: To ensure you never miss an issue, you can subscribe to Fleurieu Living by filling out the subscription form inside the magazine, or online via iSubscribe. 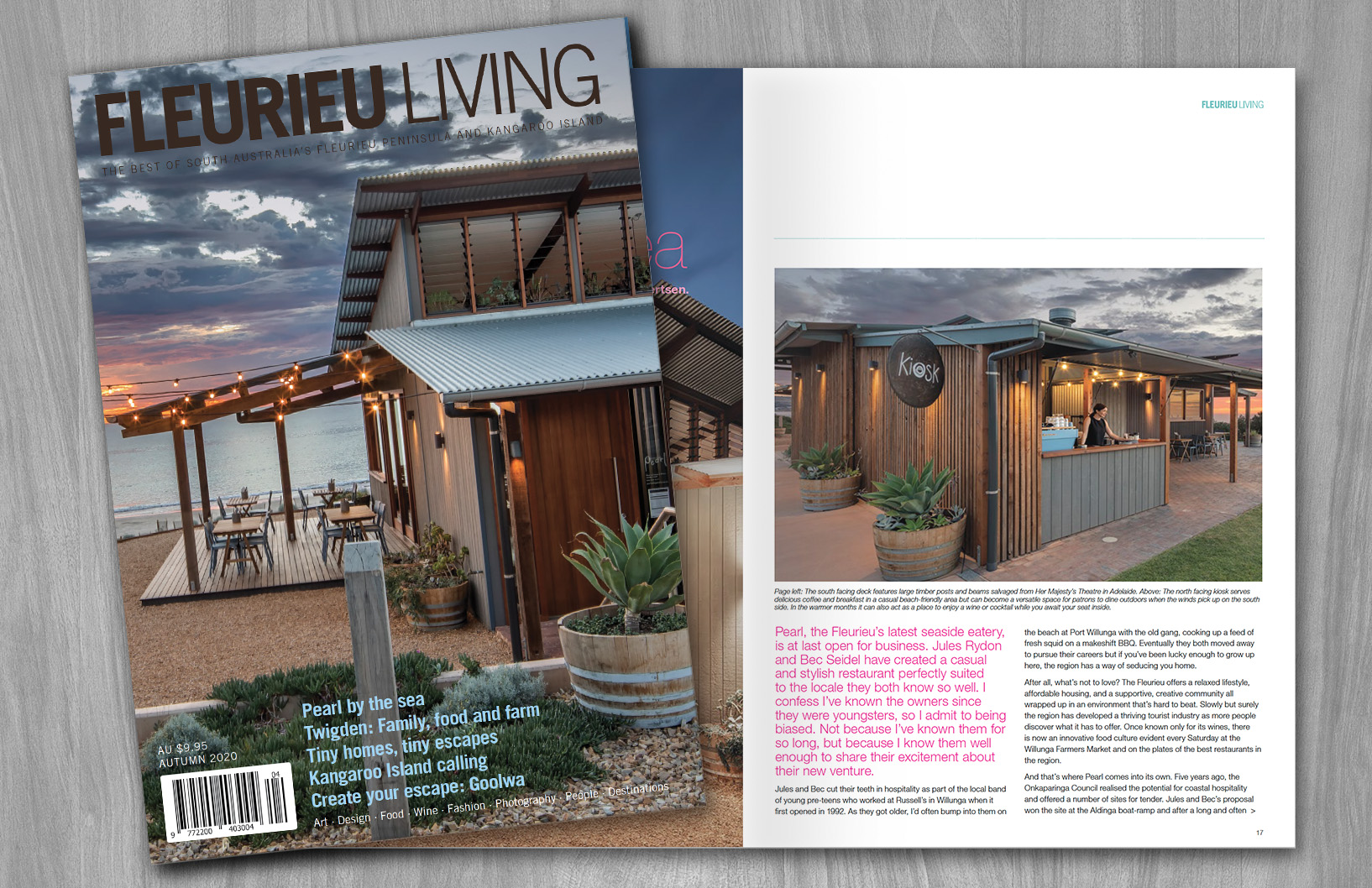 COVER FEATURE
Pearl, the Fleurieu’s latest seaside eatery, is at last open for business. Jules Rydon and Bec Seidel have created a casual and stylish restaurant perfectly suited to the locale they both know so well. I confess I’ve known the owners since they were youngsters, so I admit to being biased. Not because I’ve known them for so long, but because I know them well enough to share their excitement about their new venture.

FEATURED HOME
So often it’s the little things that make a home. For Tess Twigden, it’s the small room just off the kitchen. Originally marked as a study or bedroom, Tess imagined  something quite different. It’s her favourite spot in the house: a butler’s pantry of sorts. But where modern homes so often try to hide away the evidence of life behind sleek cabinetry, this room seems to revel comfortably in the everyday good stuff.

DESTINATION FEATURE
There is something transformative about Kangaroo Island (KI). Since moving to the Fleurieu in 2004, we have travelled there over a dozen times both for work and for pleasure, drawn back by the relaxed pace and friendliness of the locals and the sheer beauty of the landscape. It’s an island of contrasts with the sheltered north coast giving way to the beautiful geological features and wild waters of the south.

ARTIST FEATURE
In April of last year, friends, family and colleagues farewelled artist Annabelle Collett. Annabelle was only 64 and sadly passed away due to complications arising from cancer. A posthumous exhibition at the Signal Point Art Gallery in Goolwa celebrates her large body of work and the significant contributions she made to South Australian art and culture throughout her illustrious career.

LOCAL TOWN FEATURE
Goolwa’s laid-back lifestyle is underpinned by a deep respect for its rich natural history, as well as its importance to early European settlers as a bustling port town. Surrounded by an abundance of picturesque waterside playgrounds, with direct access to the best of the Fleurieu’s food, wine and art, it’s hard to understand why one would ever leave. But if forever is not an option, at least stay a while and explore some of the understated treats Goolwa has to offer.

FOOD FEATURE
Helen Mouneimne’s smile seems to be made for television. It offers the first glimpse into her optimistic worldview and – as a passionate cook – her love for food. You may have seen her smiling during the cooking demonstrations she sometimes runs at the Willunga Farmers Market. Soon she’ll be smiling for a wider audience as the resident chef on season five of Channel Nine’s travel and lifestyle show, Adelady.
ALL CONTENT COPYRIGHT 2017 FLEURIEU LIVING PTY LTD.